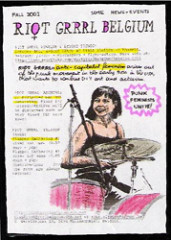 Old flyer I made, with a drawing of Sleater-Kinney drummer Janet Weiss, and someone coloured it in 🙂

I didn’t know anyone who liked or even knew Sleater-Kinney when I went to see them for the very first time in Amsterdam in 2000. It was the year of sexual violence at the renewed Woodstock festivals as well as the beginnings of Ladyfest which started as a reaction to the fact that women could not find a safe space at music festivals. It was also a time when in small Belgian towns you could still find CDs of “obscure” bands like Babes in Toyland, Bikini Kill and Sleater-Kinney in any random record shop. Internet was still relatively new but it opened a world to images and MP3s of bands that were rarely if ever played on the radio. I already owned Dig Me Out (thanks to one of the random record shops) and bought the newly released All Hands on the Bad One at the concert.

That first Sleater-Kinney concert meant the world to me. It was my scene, my community, that I had found at last, even if it existed only for one night. The concert seemed to bring all those lost grrrls like me together. Young women craving for loud female musicians on stage and feminist solidarity and empowerment. I didn’t know any of the audience members but one of them handed me a flyer of a new feminist collective from Amsterdam/The Hague called Bunnies On Strike. They had just released their first zine and had lots of other projects in mind. Back home, I got in touch with them, and through this and the magic of early internet communication tools I got to know quite a few of those young women who had attended the Sleater-Kinney concert in Amsterdam. Members of Bunnies On Strike but also a photographer who would later start Sleater-Kinney-inspired bands. Apparently the community didn’t end after that concert night. 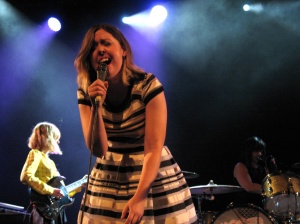 The next Sleater-Kinney concert I attended, in Brussels this time, brought us back together. We had our own little reunion and this time my friends were all playing in bands too while I was writing zines and we had all been involved in organising our own Ladyfests in Belgium and the Netherlands. It must have been in 2005, right before the split. And then 10 years later in 2015, Sleater-Kinney were back in Europe for their own reunion and played in Antwerp, where in the front rows I met up again with my local queer-feminist community that seems to be ever growing. I could tell the entire story of Belgian/Dutch punk feminism through Sleater-Kinney concerts! This band, from the other side of the planet almost, was our world. Their powerful music helped encourage and build the connections of our community. And while they are still rocking out, so do we.