Last weekend I travelled to Swindon Zine Fest and North West Zine Fest together with Jessica of ESCzine. Both zine fests were a lot of fun and I was so happy to be there: lovely people, nice atmosphere, great zines, interesting locations, cool workshops (at NWZF)…

Swindon Zine Fest was organised at the Central Community Center. It was the first time I ever visited Swindon and apparantly it’s known to be the “railway town”. The zine fest offered lots of awesome zines and delicious cakes (mmmm lemon drizzle!!). Jessica and I had our shared table in the middle of the room as you can see on the photo. It was so nice to see some zinesters I had met at Swansea Zine Fest again like Kirsty, Cath, Morgan, and Phoebe, and also to meet Russell of Lunchtime for the Wild Youth for the first time. We had some adventures getting to Swindon and to the fest but you’ll have to wait to read about it in Same Heartbeats #16… 🙂 (Hopefully out in autumn or early winter so be patient). For now, have a look at some photos of the zine fest: 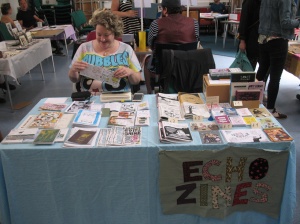 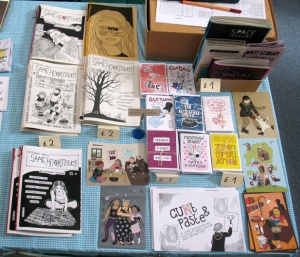 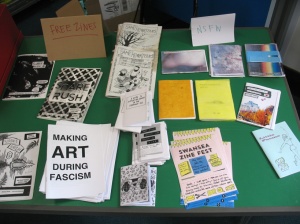 The next day, North West Zine Fest took place at the People’s History Museum in Manchester. It’s my favourite museum ever and it was a perfect place to host this fest. Again it was lovely to meet so many zinesters, familiar faces, old and new zine friends. I also participated in two super interesting workshops: one about podcasting and one about archiving DIY cultures. After the zine fest, Jessica, her friend Simon, my friend Chella of Adventures in Menstruating, and I had dinner at a nearby restaurant. Jessica and Simon also tried out Chella’s finger twister game zine and there were some ziney photo shoots with a long-armed stapler. 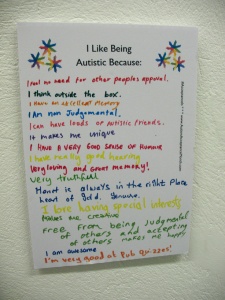 After the zine fests were over, I spend some time in Manchester acting like a tourist. Of course I had to visit the Salford Zine Library which had moved into a new room in the Nexus Art Cafe. I was excited by their awesome collection and even found some of my own zines and a zine with a cover I had drawn. Could have spend all day there! There was no donation box as there was last time I visited, so unfortunately I couldn’t donate more zines to the library. 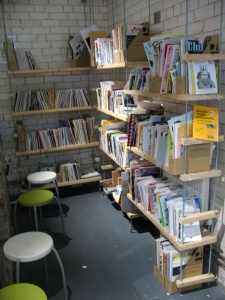 Then I went to a few record shops and to the alternative shopping centre Afflects which houses a lot of little shops. These photos were taken there: 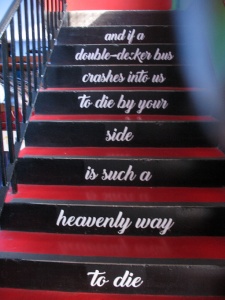 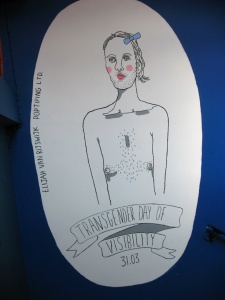 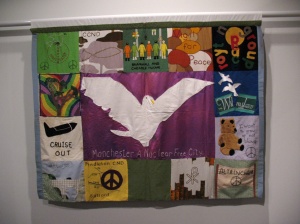 The next day I went back to the People’s History Museum for a proper visit to the museum itself. I couldn’t resist “crossing the picket line” again and saw so much awesome stuff: banners, badges, a badge machine that visitors could use, a jukebox with great playlists, suffragette games, a suffragette made out of lego… There were also some hoola hoops on display near the entrance to try out for some playful protest.

On my way back to Belgium, I passed by London and visited the radical bookshop Housmans where I met up with my friends Emma and Eva. Housmans had one of my zines for sale (thanks to Active Distribution) and also some by Out Loud. I tried to refrain myself and only bought one comic book there (my bags were already so heavy) but I did sell my entire Same Heartbeats series to them which is pretty cool! (They placed an order in advance of my visit). 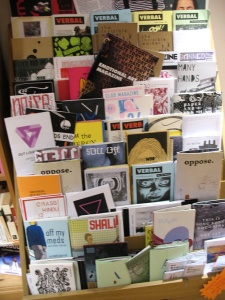 Finally, take a look at all the amazing zines I took home from the zine fests: 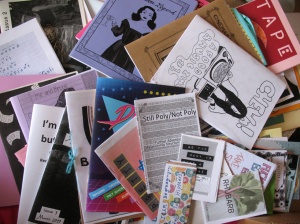